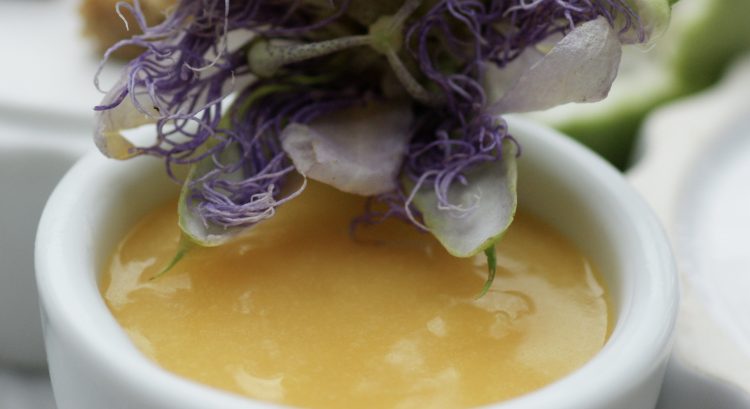 Passion fruit always seemed so exotic to me. Imagine my surprise as I was walking through the woods along the Flint River and found a green pod, and then another and another. A few days later, a neighbor happened to mention that maypops were ripe. She described the green pods I had stumbled across and I realized I had found a wild variety of passion fruit. The flowers are lavender with white frills and look  light as air and like they might float away. But give them time and they give way to the green pod where the pulp is just waiting to be scooped out and made into a Passion Fruit Curd.

Passion Fruit Curd can be served over cake, fruit, yogurt or fill the center of a mini bundt cake instead of frosting.

The wild variety of the passion fruit pods have a thick green hull with a center filled with seeds and each seed is surrounded in a little case of tart juicy pulp. To eat the a maypop raw, break it in half and scoop out the seeds and pulp. The seeds can be eaten similar to how a pomegranate seed is eaten. It is easier to eat the seed whole with the pulp instead of trying to separate the juice from the seed, but when making most recipes-the juice is strained.

Wild passion flowers are named after the cruxifixction also knows as “The Passion”. Each part of the purple flower tells a part of the Passion of Christ.  According to Patrick Jesse Pons-Worley in The Passionfruit Cookbook “Early explorers felt that the passion flower had a special purpose to promote the spiritual life among the people where it grew”.

According to the story, “The spiraled tendons of the plant were taken as symbols of the lashes Christ endured, and the central flower column as the pillar of the scourging. The 72 radial filaments of the flower were seen as the crown of thorns; the three stigmas as symbols of the nails used in the crucifixion, as well as the holy Trinity; the five anthers, as the five wounds of Christ; and the style as the sponge doused in vinegar used to moisten Christ’s lips. Taken together, the five petals and five sepals were used to refer to the ten apostles who did not either betray or deny Christ. The fragrance of the flower, continued Pons-Worley, helped recall the spices used to embalm the body of Christ. Finally, its globular egg-size fruit was taken as a symbol of the world that Christ saved through his suffering.”

Wild passion vine grows in the south and as far north as Van Buren County in Iowa but is known as an invasive weed in most areas today. Finding some wild fruit is a better idea than starting your own plants that will likely take over and are nearly impossible to eradicate.

Passion fruit puree can be ordered online unless there is a huge number of wild pods available. I was able to get about 1 tablespoon of juice from each pod. Break open the ripe pods and crush the pulp from the seeds using a mortar and pestle. An alternative method is to scoop the pulp and seeds from the pod while holding over a small strainer set over a 1 quart measuring bowl. Scrape the passion fruit seeds and pulp into the strainer. With a spoon, press on the passion fruit seeds to extract the juice; discard any stringy clumps attached to the seeds. Use in smoothies, cakes, cookies or strain the juice and use to make a lemon-like curd with the following recipe.

Combine juice and sugar in a 2-quart glass measure. Microwave on high for 2 to 3 minutes or until sugar is dissolved, stirring twice.  Beat eggs lightly.  Slowly add 1/2 cup of hot liquid into the beaten eggs to temper the eggs, beating constantly with an immersion blender or wire whisk. Return the  egg mixture back into hot liquid and blend well. Microwave on high 3 to 4 minutes or until mixture thickens, beating with an immersion blender every 60 seconds to keep mixture from curdling. While mixture is still hot, stir in butter until melted. Allow to cool and serve over cake or tiny rye toasts or fresh berries.